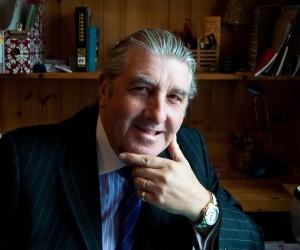 On leaving full time education, Steve joined Imperial Chemical Industries, I.C.I., in their Research Department, where he gained a thorough grounding in Physico-Chemical Analytical Techniques and was ultimately involved as a key player in the development of improved operational performance across a broad range of chemical manufacturing plants. A spin-off from these projects resulted in the development of innovative chemical formulations designed for the dispersal of oil spills at sea and to enhance secondary and tertiary recovery of crude oil from the UK’s North Sea oil fields. A further development of this research led to the discovery of a range of chemicals capable of recovering hydrocarbon from oily waste. I.C.I. formed a joint venture company (Emultec Ltd) to exploit this discovery and Steve assumed responsibility for the sales and marketing of this novel concept.

In 1985, the Institute of Petroleum became aware of the need to produce a code to cover the safe cleaning of large diameter black oil storage tanks. Steve was invited to become a member of the team, which included representatives from all of the UK and European oil companies, charged with producing this Safety Code.   In March 1989, the Institute of Petroleum produced its ‘Tank Cleaning Safety Code’, which has become the definitive document worldwide.

At about this time Steve was invited to join the board of Progressive Technical Services with particular responsibility for international sales and contracting. PTS was atotally owned subsidiary of Leigh Environmental Waste Management Group. In 1992 he became Managing Director of this leading Oil and Petrochemical Industry Service Company. P.T.S. specialising in oil spill response and in the cleaning of large diameter black oil storage tanks and the subsequent processing of the resultant hydrocarbon waste for oil recovery, recycling and waste minimisation. Steve had direct technical responsibility for the Exxon developed ‘P43’ sludge resuspension system. Several innovative techniques were developed by Steve during this time, including the ‘Topographic and Analytical Survey’ for crude oil storage tanks and an ‘Actuating Nozzle System’ for sludge resuspension without man-entry on live tanks. He has recently developed a crude oil sludge control system, Solv8, which industry experts are already hailing as a major innovation for the bulk liquid storage industry.

As legislation increases the pressure on industry to improve Health & Safety and Environmental performance, so the need to develop new, innovative techniques falls to the service industries. Steve has assisted in the development of a number of non man-entry and waste minimisation and management systems around the globe.

As a result of his increasing profile in the industry, Steve was asked to present technical seminars to international audiences on themes such as ‘Bulk Liquid Storage Tank Design and Management’, ‘Storage Tank Cleaning and Sludge Disposal’ and ‘Classification, Storage, Transport of Hazardous Chemicals’, ‘Environmental Awareness’, ‘Waste Minimisation’ and ‘Process Operations’.

In support of and often directly as a result of this training, Steve has been asked to provide a range of directly related services including a ‘Storage Tank Health Check’, Sludge Topographic Surveys’, ‘Tank Desludging without Man-Entry’, ‘Sludge Processing’, and Crude Oil Sludge Control with his innovative ‘Solv8’ sludge control system.

These are activities in which he is heavily involved today, constantly researching and developing new techniques and updating his operational knowledge to accommodate technological advances in these fields.

As a recognised industry expert, Steve decided to offer his services to a wider audience and in 1997, formed Bro Nant International as a vehicle through which to achieve his ambitions. As an independent, Steve is able to work for both contractor and industrial major alike and has built up an enviable reputation both in the UK and overseas. Strategic alliances have been formed with leading Oil Industry Service Companies Willacy Oil Services and KB Oil Environmental, and with Motherwell Bridge Group whose expertise in the building and maintenance of storage tanks is second to none. Each of these contracts operate as retained consultancies and rely upon a two-way flow of information and expertise. Independent companies, picked for their particular skills and hands on expertise, including Willacy Oil Services, KB Oil Services, Separation Oil Solutions Ltd., Solids Control Services, DBI Ailsa, Veolia Industrial Services, Total Waste Management, GJJ Engineering, Technical Demolitions, Carter Oil and Gas and others, complete the portfolio of services, which allows Bro Nant International to offer a full turnkey capability from a single managed source. A comprehensive knowledge of the relevant industry standards including BS, E.E.M.U.A. and API ensures that all projects are undertaken with a high degree of professional integrity, all participants having been independently audited by Bro Nant International.

During 2000, Steve assumed responsibility for Penvironmental Ltd. and saw to completion a contaminated land remediation project in Azerbaijan. The soil had been contaminated over several decades with hydrocarbons from the indigenous oil fields. The project was a technical and commercial success, employing innovative thermal desorption techniques, and was later adopted by a European funded project exploring the viability of remediating the entire Ashperon Peninsula.

Safety and Environmental issues play an increasingly important role in the way we conduct our businesses. We are bound by legislation to look at how we operate, to seek out ways to improve the working environment for our employees and to ensure that our daily routines do not impact detrimentally on our local environment. Steve was instrumental in developing and implementing the Safety Policy Statement for Progressive Technical Services and for promoting a Safety Culture within the company to embrace Hazard Identification & Risk Assessment and Performance Measurement. Bro Nant International offers independent Safety Audits to a diverse range of industries.

BNI Environmental Audits generally comprise an initial meeting with the client to establish a brief, followed by a Site Investigation to produce a site-specific environmental report. Should this investigation identify any pollution ‘hot spots’ requiring detailed invasive investigation and analysis, we are able to advise on appropriate providers of these services. The site investigation is backed up by comprehensive desk research covering areas of specific interest or designed to reveal the entire raft of environmental markers including previous occupancy, historical pollution incidents, groundwater vulnerability, discharge consents, liability to flood, landslip, subsidence etc etc. Any residual chemical waste is classified, by analysis if required, repackaged as necessary and labelled to meet current legislation before being consigned to a specialist licensed carrier for ultimate disposal. Steve has recently completed Environmental Impact Assessments for 9 sites of MISR Petroleum in the Arab Republic of Egypt.

BP Galeota Point in Trinidad will be subjected to a tankage survey during March 2012. The first of three tanks has been cleaned to hot-work and the sludge transferred to a receiving tank. Ultimately the sludge from three tanks will be processed at site for hydrocarbon recovery and waste minimisation and the resultant residual solids disposed of in-line with local legislation.

Bro Nant International is registered as a partnership in the UK. 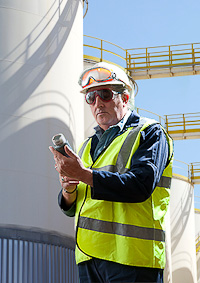 Welcome to our new web site